Restoration of the Polyptych by Lorenzetti in Pieve 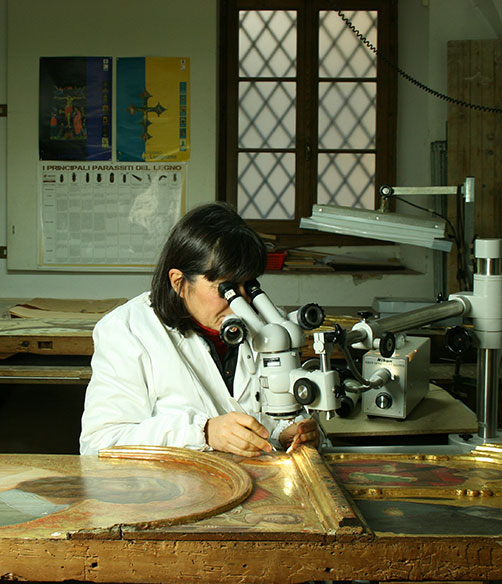 The renewed light of the Lorenzetti Polyptych

The masterpiece by one of the most important 14th-century painters will shine again in Pieve di Santa Maria in Arezzo. The church is an imposing Romanesque architectural structure and is certainly ready to welcome back its most famous painting. It is a tempera on panel table with a gold background that depicts “Madonna with Child, Saints, Annunciation and Assumption”, painted by Pietro Lorenzetti between 1320 and 1324 after having been commissioned by the then-Bishop of Arezzo, Guido Tarlati.

The painting is historically important, as it is present in every Italian art history book, was cited by Vasari nelle Vite and can boast still being displayed in its original location in the presbytery of Pieve, albeit with a different layout due to the church’s Neo-medieval style restorations of the church of the second half of the 19th century. The work, which measures 3.15 meters in height by 2.93 metres in width, has undergone a long restoration which gradually changed according to what the painting revealed to the expert eyes of the restorers of Ricerca, the Arezzo consortium composed of Paola Baldetti, Marzia Benini and Isabella Dorandi.

The completion of the long work was made possible thanks to the fact that the project won the #ChimetConTe (Chimet With You) call twice in a row, which the leading precious metals recovery company issues precisely to support social and cultural projects of the utmost value. Isabella Droandi explained, “The restoration began in 2014 with a long year of research also carried out with external experts. The preliminary scientific research was not destructive, and included photographic and x-ray surveys to understand how to best proceed with the restoration, but without any color sampling that would have impacted the work”. The restoration was commissioned by Paola Refice, the then-Superintendent of Arezzo, and continued under the direction of Felicia Rotondo when the Superintendence merged with Siena and Grosseto.

“The initial idea was to to check the state of conservation of this especially important painting that Lorenzetti himself probably worked on directly in Arezzo. The state archives of Florence still preserve the contract with which Tarlati commissioned it from Lorenzetti. It is dated April 17, 1320 and includes an explanation of what the work was to depict, with the recommendation to use precious materials such as gold and the blue of lapis lazuli. The restoration brought them to light again, employing long and tiring techniques and procedures that were chosen from time to time based on what the painting revealed”.

The renewed light of the Lorenzetti Polyptych

The first task was to check the state of the restorations that had been urgently carried out by Carlo Guido in 1976 following an act of vandalism that the work had suffered at the hand of a lunatic, who had placed two lit candles against the wooden part in the back.

“It was at that moment that we discovered an obvious alteration and decided to proceed by removing the restoration of 1976 because the paints used were of natural origin and had been ruined by exposure to light,” explained Dr. Droandi. She continued, “We had to proceed with a more lasting restoration with synthetic, non-photosensitive paints for better conservation. Immediately afterwards we planned on proceeding with a small new restoration, but when we went to remove the restoration of 44 years ago we found a huge, unexpected problem. During the restoration of 1976, a huge amount of deep-rooted and ancient dirt had been left out of extreme cautiousness, which was located on infinite parts in gold and in the colors. We realized that the painting was full of very hard residue that was quite difficult to remove”.

The restoration of Lorenzetti's masterpiece thus became a complex and costly challenge which required more time and minimally invasive techniques. “We completely changed the project and thus the relative quote. In agreement with the Superintendence, we embarked on a difficult operation to remove the dirt.

The risk lied in damaging the original, so we decided to proceed in small steps, cleaning everything, month after month, year after year, using a microscope with 10x magnification. It was very tiring, with two restorers using two microscopes at the same time. The cleaning concentrated on the gold bottom and all the embossed burin decorations in the gold leaves, all the channels created to make the light shine: there was no other solution than to proceed in this way, cleaning every single channel from the black dirt that had accumulated. We cleaned all the flat surfaces and all the segments of the gilding and the result that everyone will soon be able to admire gives us great satisfaction, because the brilliance of the engravings has been perfectly restored.

The last phase of the restoration

After long months of hard work on the dirt residues which had stratified over the centuries, the Ricerca restorers, with the support of #ChimetConTe, were able to proceed with the filling phase, filling the gaps with color, bringing everything back to the surface of the work with a scalpel. This step was also entirely carried out under microscopes and completed by passing over the watercolor lines in the right colors to integrate those missing, then lastly protected with synthetic paint.

The importance of #ChimetConTe's support

Isabella Droandi explains how decisive the support was: “The two contributions received (20,000 + 10,000) thanks to the requests made first by the parish of Pieve led by Don Alvaro Bardelli and then by the association Art Angels Arezzo chaired by Gianna Rogialli, allowed completing the restoration which had become increasingly complex. It was particularly significant to have the support of an Arezzo company for a work that was financed 60% by Italians and 40% by Americans.” The celebration of its unveiling, which was to be held exactly 700 years from the contract date, April 17, 2020, was postponed. But the work is finished, the gold shines again and will soon illuminate La Pieve in Arezzo.

The restoration of the Polyptych by Lorenzetti has drawn the attention of the specialized press: Finestre sull’Arte, Medioevo and Bell’Italia. 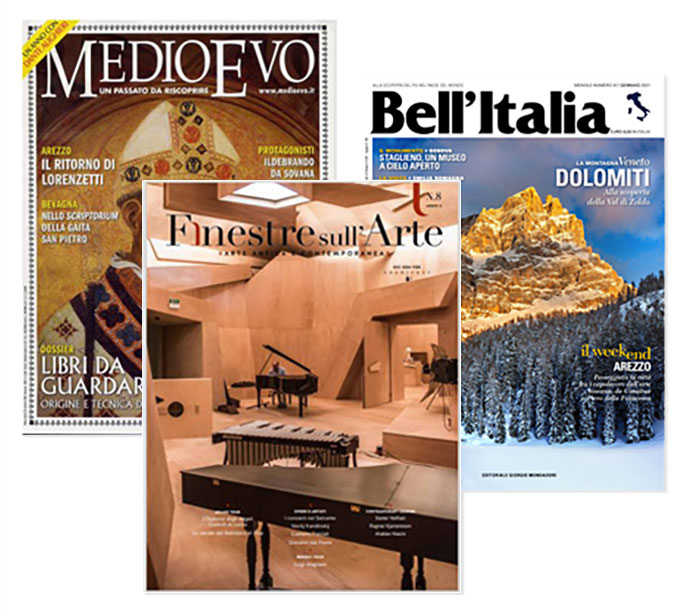 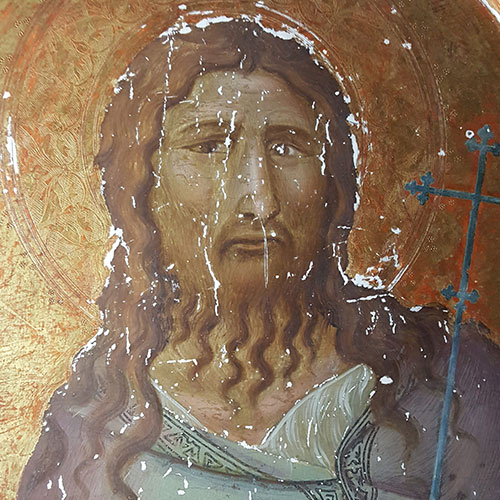 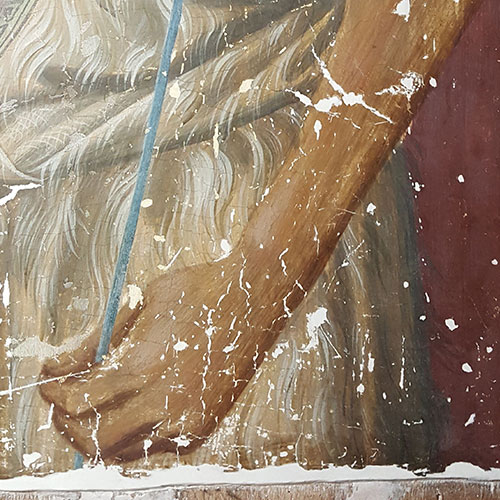 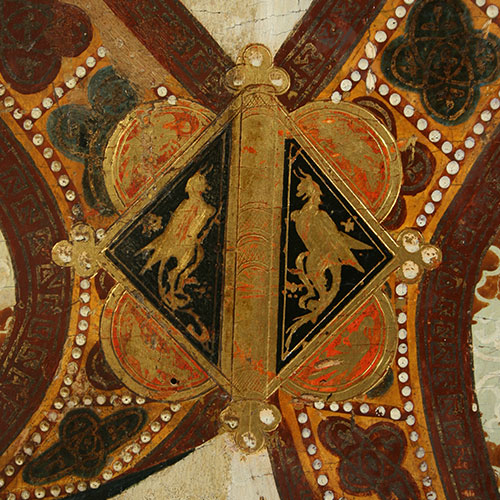 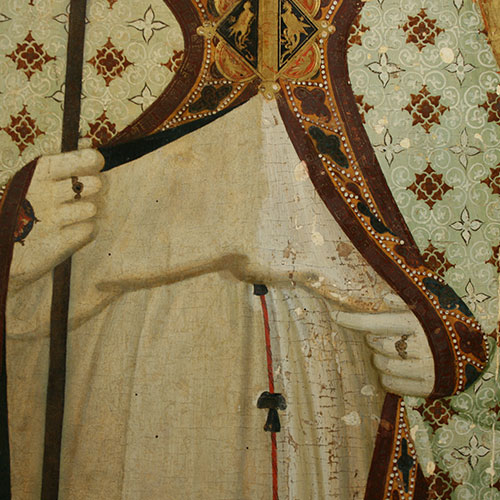 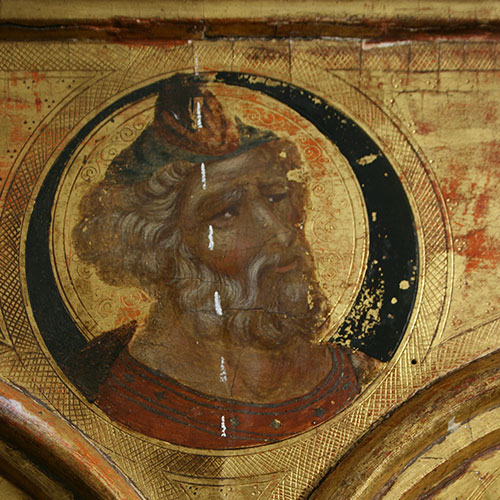 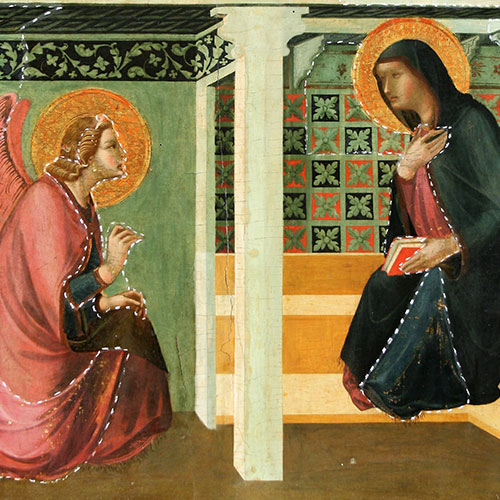